Omega2 Plus – small single-core computer on Linux (OpenWRT/LEDE). It is interesting by the presence of external pins (GPIO), interfaces I2C, I2S, SPI, Ethernet. Official price – 9$, but delivery can cost over 50% Omega price (depends of country).Let’s consider in more detail the launch of the module and its initial software stuffing. 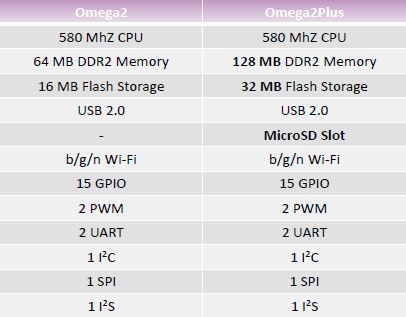 The main difference is only in RAM and Flash sizes, and and the presence of a MicroSD slot in Omega2+.

Both models use the same CPU MediaTek MT7688 (MIPS arch) with frequency 580 MHz.

The platform supports many popular programming languages, such as Python, Ruby, C++, PHP

To start the module, you just need to supply power 3.3 V (current 0.5 A) to the corresponding pins (pinouts is shown on image below) 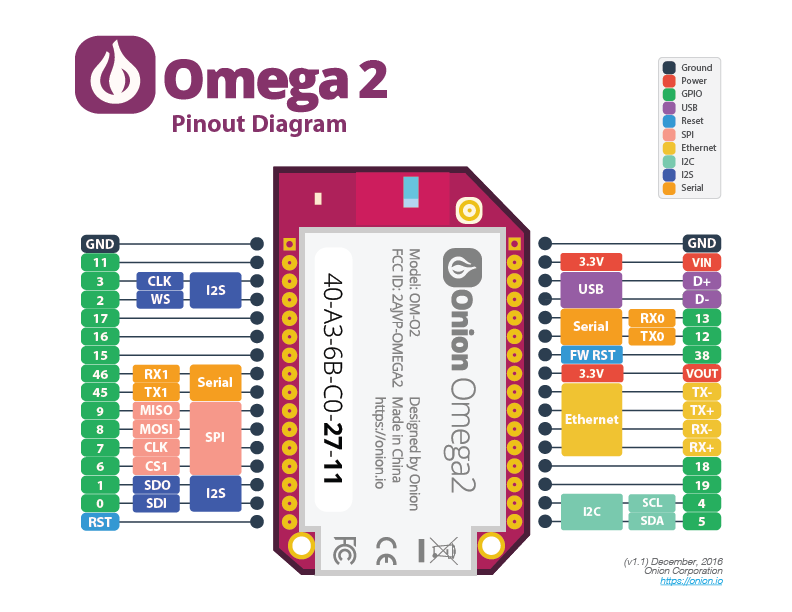 When connected, Omega winked at the LED on the front panel and fell silent. WiFi network not up. I had to connect the console.

I saw that Omega stop on the stepEEPROM:Read from [factory] offset.

The first thought is poor supply. After reading forums the theory was confirmed.

I have only an adjustable impulse regulator for 10 A, I had to use it. And the module successfully launched and up the WiFi network with SSID Omega2-XXXX 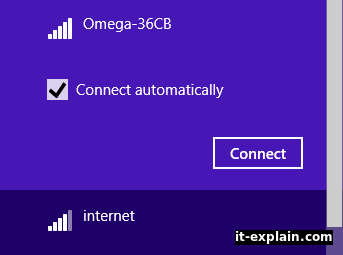 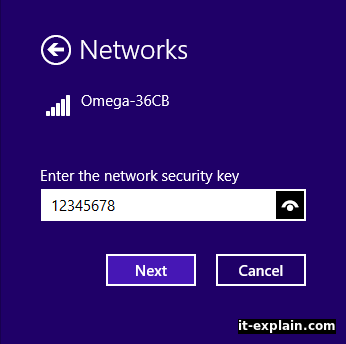 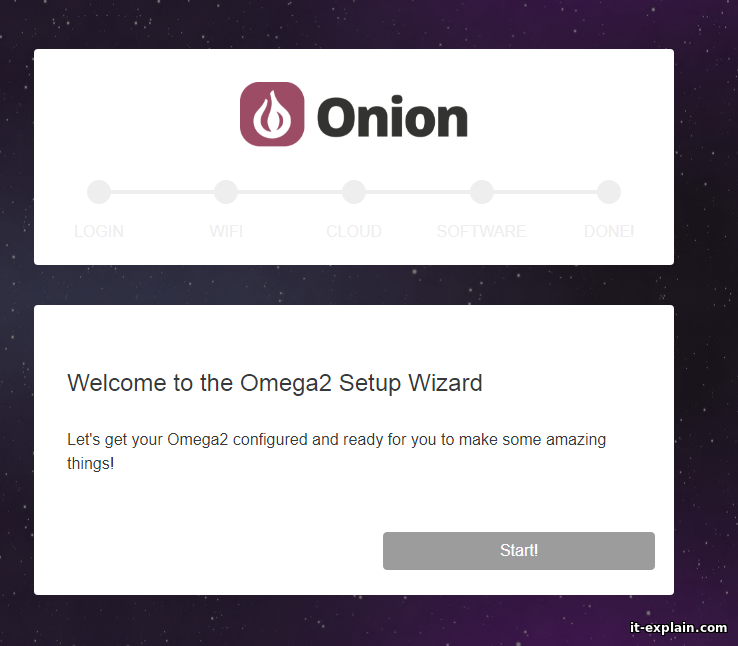 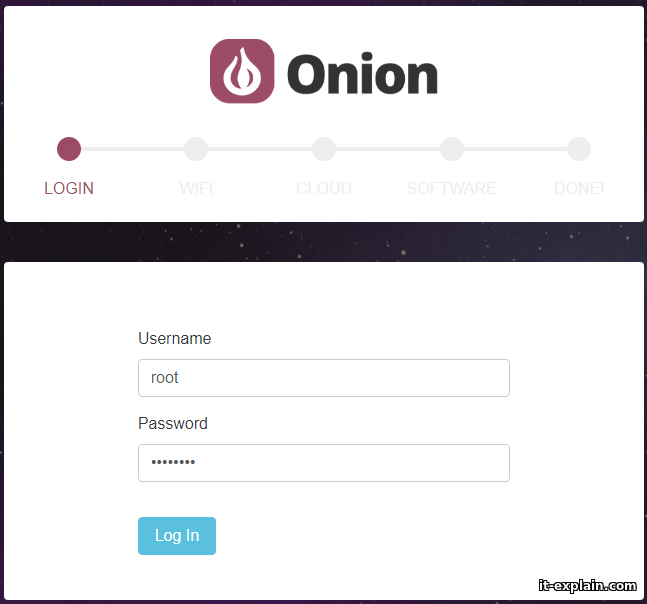 Next, you need to connect to the WiFi network. This step is very important, because without it Omega simply refuses to run. 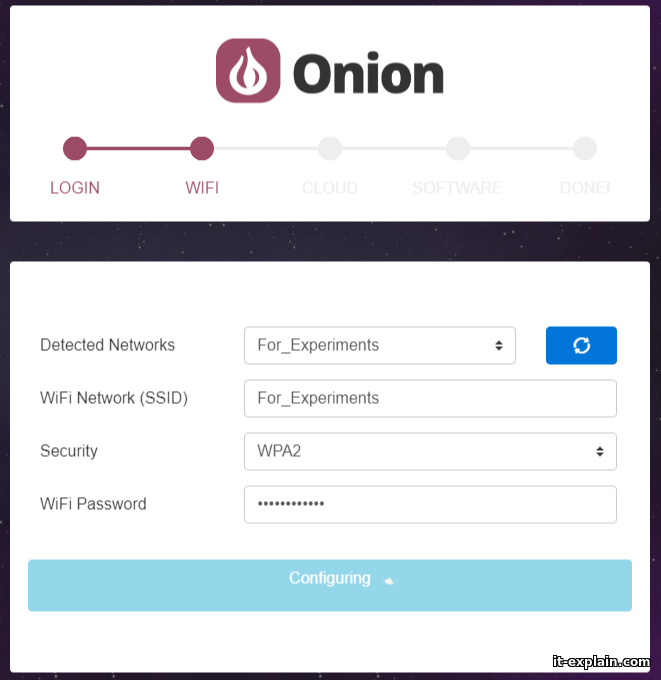 After successfully connecting to the Internet, Omega requests that the device be registered in the cloud. Registration is optional, so I skipped this step (if necessary, the device can be registered later). 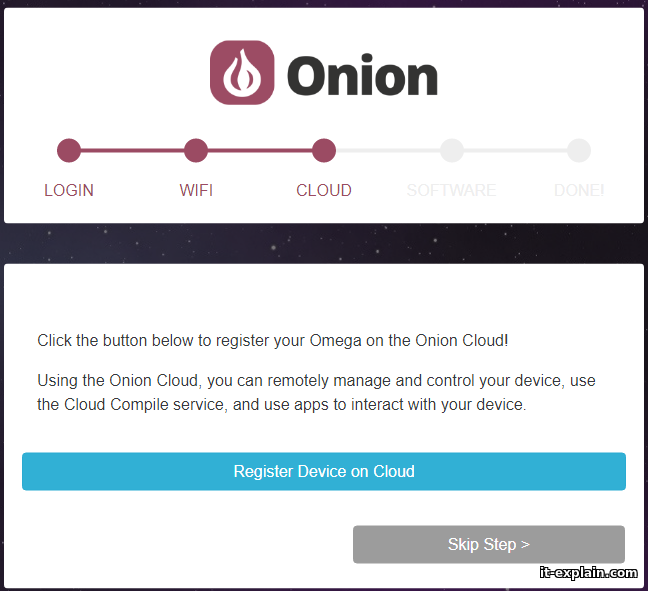 Next, update the firmware and install the console. 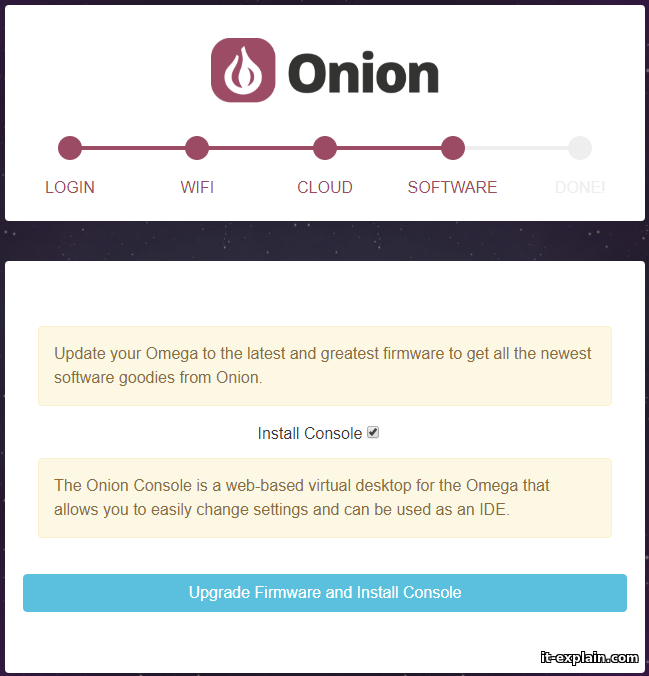 The update process lasts a little longer than 4 minutes, so that anyone who will use the module, I recommend waiting for the appearance WiFi network Omega. 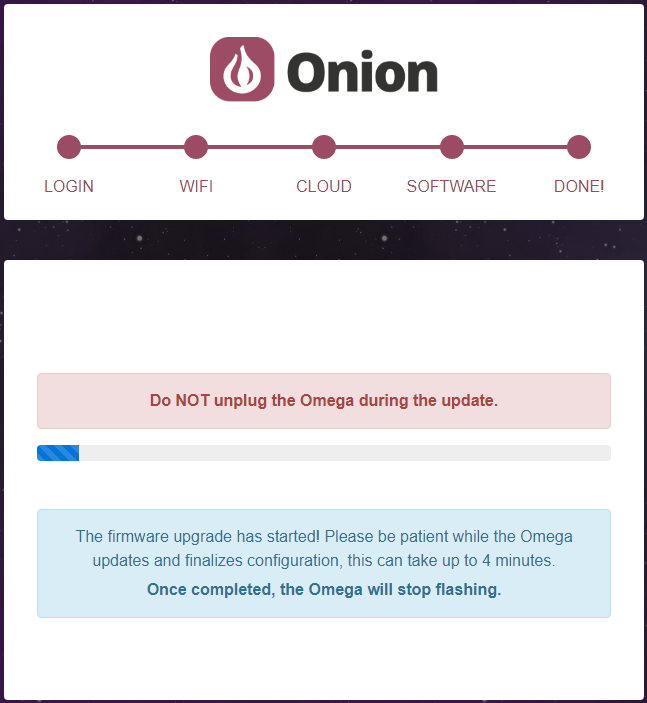 After a successful update, a corresponding message appears.

Go to url http://192.168.3.1 a welcome screen appears asking for authorization. The login and password are the same as those used for installation. 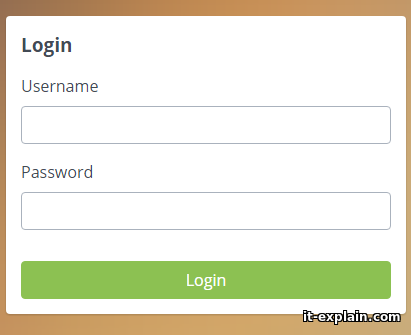 After the authorization, a similarity of the “Desktop” with application icons opens.

GPIO Tool – as is obvious from the title, the application for controlling pins GPIO. Pins can be assigned as inputs or outputs. For pin-outs, you can set 1 or 0.

OLED Expansion Control – An interesting application for controlling the display. Allows you to write text and upload images. Unfortunately, I did not have a suitable display to work with the Omega.

Terminal – the actual terminal via a web browser. I couldn’t run it. Constantly hung the inscription: “Please wait while the Terminal App is installed”

Settings – сGeneral settings. You can see the status of the chip, the fullness of the flash drive, change the chip name (hostname), password,change SSID and password access point, update firmware, Factory Reset, register an omega in Omega Cloud. 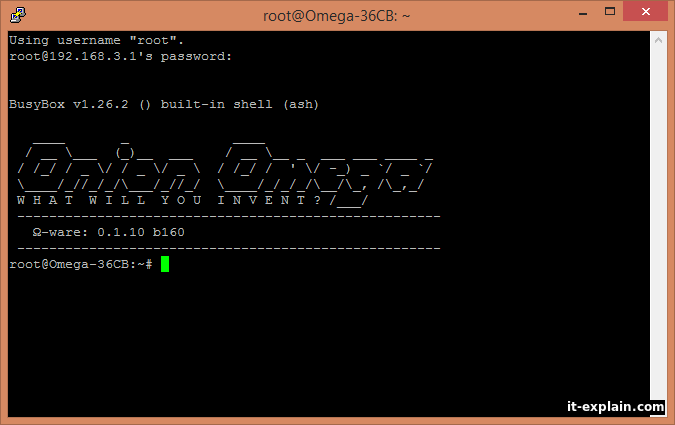 Omega itself works under Linux OpenWRT/LEDE. That is, we actually have a full-fledged Linux with the package manager opkg.

Omega uses its own repositories by default, but they are rather meager. It do not have many programs. Therefore, I immediately recommend that everyone include the LEDE repositories, which are already written in file, only need to be uncommented. 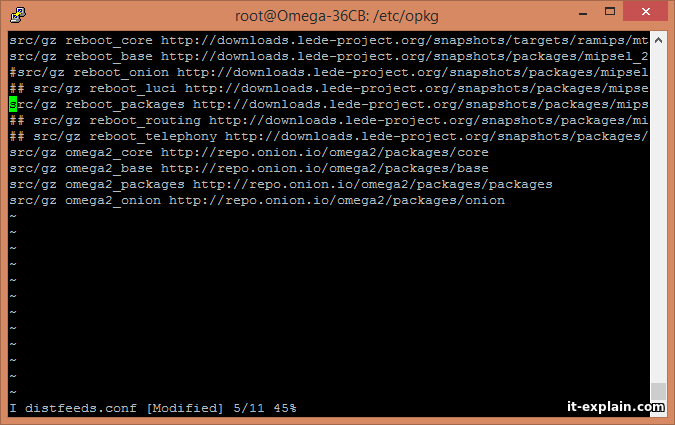 After that I installed programs mc, htop, screen without any problem. 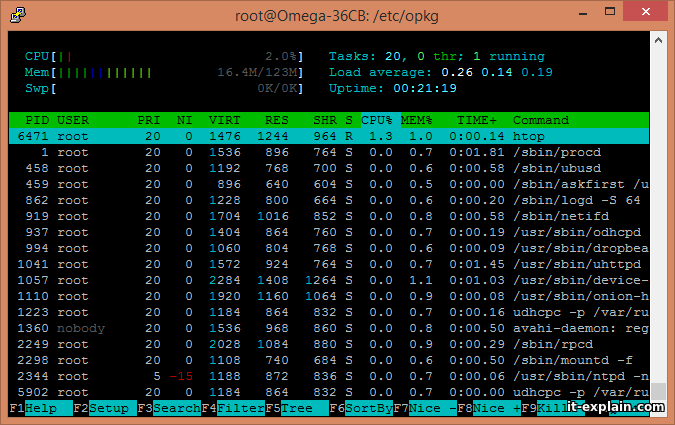 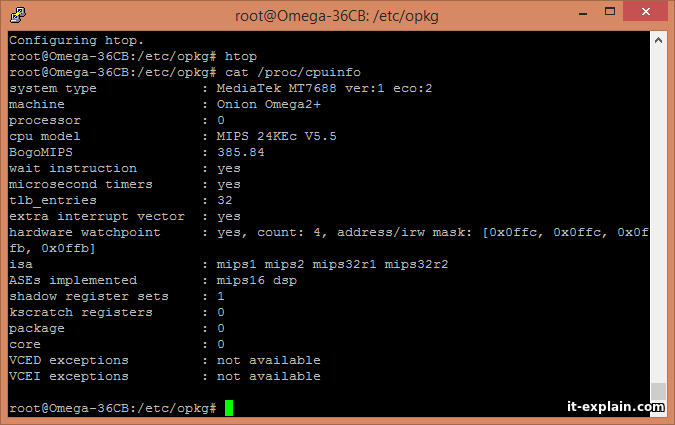 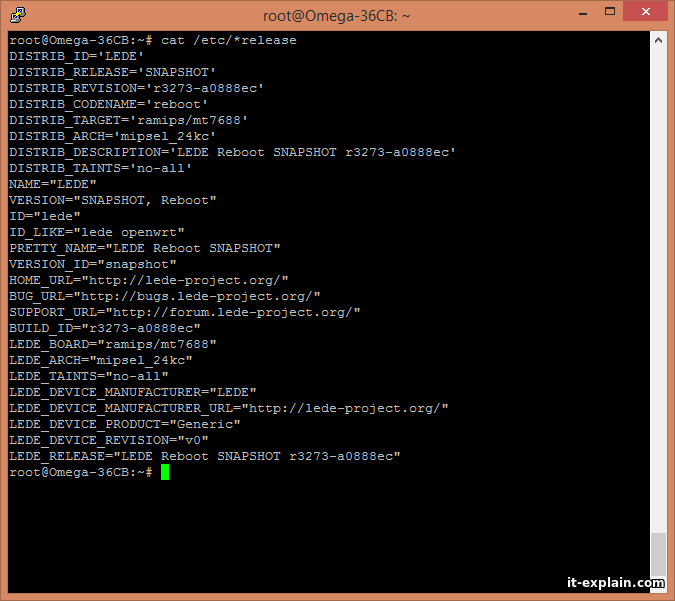 By default, Omega connects to the access point and share Internet, raising own access point. There are pins for Ethernet port, but I tested only the access point mode. All wireless equipment, that I used for tests, supports the standard 802.11n. Speedtest results:

Direct connection to the router (under WiFi):

speed through the Omega is slower by a factor of 6!

Disadvantages:
– Absence of the stabilizer on 3.3 V
– No microUSB connector for power

An interesting alternative to Raspberry Pi, Orange Pi and similar boards. For those who do not need 4 cores and a lot of RAM, but important compactness and low heat – Omega is one of the best options. The only significant drawback, in my opinion, is the lack of a stabilizer from 5 V to 3.3 V.

We use cookies on our website to give you the most relevant experience by remembering your preferences and repeat visits. By clicking “Accept”, you consent to the use of ALL the cookies.
Do not sell my personal information.
Cookie SettingsAccept
Manage consent

This website uses cookies to improve your experience while you navigate through the website. Out of these, the cookies that are categorized as necessary are stored on your browser as they are essential for the working of basic functionalities of the website. We also use third-party cookies that help us analyze and understand how you use this website. These cookies will be stored in your browser only with your consent. You also have the option to opt-out of these cookies. But opting out of some of these cookies may affect your browsing experience.
Necessary Always Enabled
Necessary cookies are absolutely essential for the website to function properly. These cookies ensure basic functionalities and security features of the website, anonymously.
Functional
Functional cookies help to perform certain functionalities like sharing the content of the website on social media platforms, collect feedbacks, and other third-party features.
Performance
Performance cookies are used to understand and analyze the key performance indexes of the website which helps in delivering a better user experience for the visitors.
Analytics
Analytical cookies are used to understand how visitors interact with the website. These cookies help provide information on metrics the number of visitors, bounce rate, traffic source, etc.
Advertisement
Advertisement cookies are used to provide visitors with relevant ads and marketing campaigns. These cookies track visitors across websites and collect information to provide customized ads.
Others
Other uncategorized cookies are those that are being analyzed and have not been classified into a category as yet.
SAVE & ACCEPT

We do not use obtrusive advertising.

We do not use obtrusive advertising.